How to get a healthier gut and why it matters Our gastrointestinal (GI) tract – often referred to as the gut – plays a critical role in our health and wellbeing. The simple act of eating food is important when striving for a healthier gut. Why? Because once food enters our mouth, we chew and – with the help of several enzymes – break down the food into tiny pieces, so it can propel down the oesophagus into the stomach.

In the stomach, food is mixed with acids and enzymes, and some protein digestion starts here. The contents of the stomach are then released slowly into the small intestine where most of the digestion occurs. At this stage, organs such as the liver and pancreas release more digestive juices to complete the final stages of the breakdown of your food. This means protein is broken into amino acids, carbohydrate into various sugars and fats into fatty acids, along with other vitamins and minerals also taken from the food.

These nutrients are now in a form that our body can absorb, thanks to the digestive process.

The gut needs to function well to ensure we obtain the many nutrients that our body needs to function. A healthy diet plays a key role, as we need a wide range of nutrients that we can only get from choosing foods as close to their natural state as possible. Choosing highly processed foods, drinking excess alcohol daily and consuming foods high in added salt and sugar can interrupt the body’s ability to obtain good nutrition and can result in a poorly functioning GI tract. This gut dysfunction can be the source of many chronic health problems that can interfere with your quality of life.

The gut is effectively a tube which extends from the mouth to the rectum, but it’s far from being the same along its entire length. The gut has distinct sections, each with different characteristics and roles in how it works to digest and absorb nutrients from food, how it interacts with your body’s organs, such as the liver, gall bladder and pancreas, and how it interacts with gut microbiota (gut bacteria). These sections include the mouth, stomach, and small intestine.

Dietary fibre and any components that might have escaped digestion then enter the large intestine where a diverse population of helpful bacteria use this as fuel and sustenance to feed the gut microbes, helping them to grow. The activities of the microbes in our gut are important in many functions.

Gut microbes produce a vast range of compounds that not only affect gut tissue, but also our brains, liver and skin. Some of the most plentiful bacterial products are the short chain fatty acids (SCFA), which have many beneficial functions. One of the SCFAs known for promoting good gut health is butyrate, which is the main source of energy for cells lining the colon. Its many functions include helping to maintain healthy colonic tissues – which can help reduce the risk of colon cancer – as well as influencing the immune system and reducing inflammation. Another beneficial SCFA produced during fermentation is acetate, which can inhibit the growth of pathogenic bacteria and protect the gut barrier and its function. The SCFA are largely produced via fermentation of fibres in the large bowel, highlighting just how important it is to eat sufficient fibre to fuel our gut microbes and prioritise gut health. 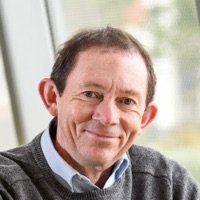 This article was written by Dr Michael Conlon

Dr Michal Conlon is a principal research scientist at CSIRO Health and Biosecurity Business Unit in the Food and Nutrition Program. He holds a PhD in biochemistry from the University of Adelaide and has more than 30 years’ experience in investigating the impact of foods and diets on physiological processes and health outcomes by conducting pre-clinical and clinical research trials. A focus of Dr Conlon’s work has been on understanding the effects of dietary components such as fibre, resistant starch, proteins and oils on gut physiology, as well as other tissues and systems of the body. The work has also involved investigating the roles of microbes such as bacteria in mediating the effects of diet on the large bowel, including studies to investigate or develop prebiotic fibres and probiotics. Dr Conlon has been instrumental in conducting a series of research activities which have shown that the inclusion of resistant starch and fibres in the diet can help protect against the toxic effects of poor ‘western’ diets on the large bowel. This included demonstrating that resistant starch can reduce the risk of tissue damage which may contribute to serious diseases of the colorectal region. This vast body of research has also demonstrated the important role of fermentation by gut microbes in producing short chain fatty acids (SCFA) which help to maintain a healthy environment within the large bowel. Dr Conlon has continued to apply his research to understanding and helping prevent adverse health conditions such as inflammatory bowel disease and colorectal cancer. He also has a keen interest in developing new foods and nutraceuticals with gut health applications from under-utilised resources.